Cooking every single day is an exhausting thought for some. Making food in large batches can be a massive time and energy saver, whether you're a busy person or just don't really love cooking. DISCOVER NOW
The trick is in finding ways to make food quickly, with limited dirty dishes left at the end of the day to scrub. The Instant Pot checks those boxes. This countertop kitchen tool is an electric pressure cooker that lets you make big batches of freezer-friendly meals, in less than half the time it takes to use a crock pot or stove. Even better, it also allows for more hands-off cooking, so you can cook a big meal while you're working during the day.
Meal prepping this way lets you rotate some of your favourites throughout the week, without having to eat the same meal three days in a row.
Get inspired—and fill your freezer—with these easy, delicious Instant Pot recipes. 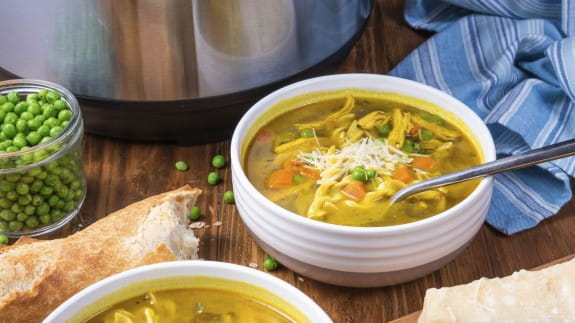 There's nothing quite as comforting or satisfying as a good bowl of chicken noodle soup. This Instant Pot recipe introduces turmeric to the mix, a warm spice gaining in popularity because of its healthful anti-inflammatory and antioxidant properties. Make sure to use black pepper in your soup, too, since it  boosts the body's ability to benefit from the turmeric. Research shows that combining piperine (the major active component of black pepper) and curcumin (a compound within turmeric) increases bioavailability by 2,000%! Making a piece of chuck roast tender on the stovetop can take a half-day of simmering. In a pressure cooker, you can make melt-in-your-mouth, fork-tender meat in an hour. Using the Club House Slow Cookers Pot Roast spice mix makes this even easier. Searing the meat in the pot before throwing all the vegetables in is a way to lock in the juices and flavour. Once that's done, toss in your veggies in pieces at least 1-2 inches wide; any smaller and they might disintegrate into the gravy.
Our Instant Pot recipe calls for carrots, celery, onions and potatoes, but you can also add turnips, parsnips or sweet potatoes to turn your meal into more of a stew. Want to add even more flavour? Use beef broth instead of water. 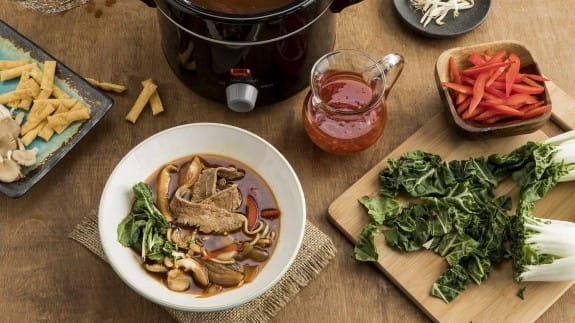 Yes! An electric pressure cooker can be used for fondue-style hot pots. Save an hour of your time—and spare your kitchen from the heat of having the stove on—by preparing your broth in the Instant Pot. Double or triple the recipe to freeze extra portions, which can be defrosted later in the pressure cooker or, if the weather allows, on the stove.

This protein- and fibre-rich recipe will satisfy your hunger thanks to chickpeas and black beans—or, really, whichever beans you have on hand. Our Instant Pot recipe calls for canned beans, but one of the best features of the Instant Pot is that it can cook dried beans in maximum 45 minutes, no pre-soaking required!
If you have some extra time and some willingness to experiment, first prep some beans for your chili by pouring in two cups of water for every one cup of dried beans. Since you'll be cooking them again after combining the other ingredients, they'll only need 20 minutes. Just make sure to drain the cooking liquid before adding the remaining elements. This will help to reduce gas and potential stomach upset. 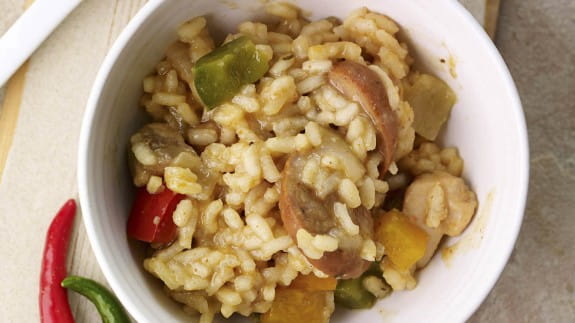 Take your tastebuds on a trip to New Orleans with this Cajun-inspired dish reminiscent of jambalaya. The beauty of this recipe is that you can easily customize it. Don't want to cook with green tea? Consider adding okra instead. If you can't find andouille sausage, chorizo or smoked Polish sausage can work in a pinch. Want to use brown rice instead of white? No problem. Cook whole-grain brown rice in the Instant Pot first by adding one cup of water for every cup of dry rice, plus an extra quarter-cup, then cooking at high pressure for 15 minutes (20 if you like softer rice) followed by natural pressure release. Batch cook the non-rice portion of the meal by doubling or tripling the recipe, and prep rice as needed.
Bon appétit!